Astrology Cards And Its Connection With Tarot Card Readings Explained 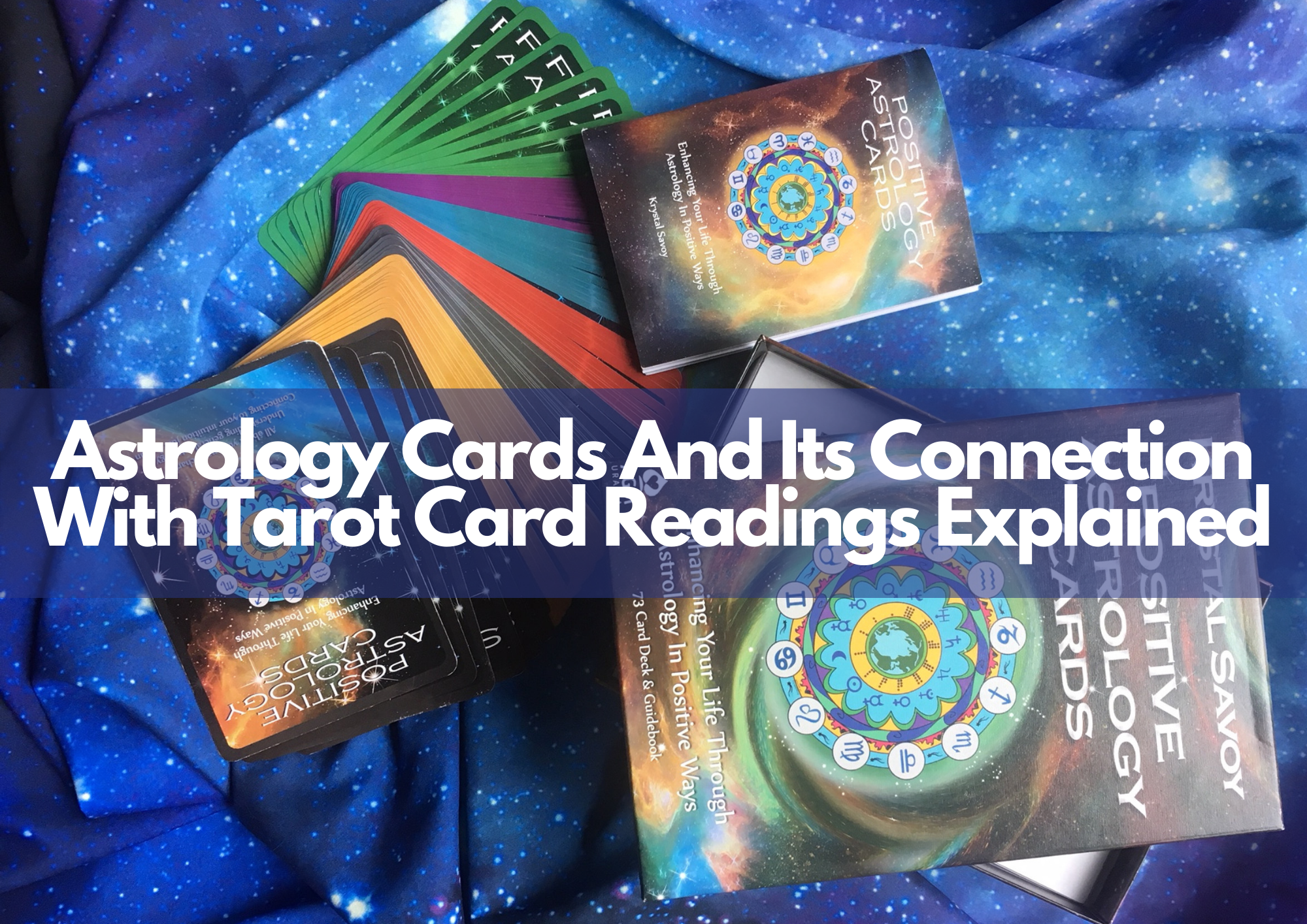 Many of us the trust and rely on Astrology cards and tarot to gain vital insights into current and potential future situations.

In times of crisis, predicament, and concern, and to predict what lies ahead, the arts of astrology and tarot can provide some solace and vital information.

One should know that even though both astrology and tarot forms of reading are quite different in terms of tools and outcome, the readers still rely on intuitions.

In this article, we will discuss the connection between astrology cards and Tarot as well as how can it be both advantageous in people's lives.

In its founding principles, astrology cards are linked to Tarot.

They both rely on symbolism and coincidence. Minor arcana reveals a clear connection with the same four elements – Fire, Water, Air, and Earth.

This means that Aries, Leo, and Sagittarius are associated with Wands, Cancer, Scorpio, and Pisces with Cups, Gemini, Libra, and Aquarius with Swords, and Taurus, Virgo, and Capricorn with Coins.

Every card within one element can be interpreted as a position of a specific planet within a sign that fits the symbolism, or as a side to the primal nature of the element.

Major Arcana cards, on the other hand, are more complicated in relation to Astrology, as each one carries different symbolisms, combinations of planets, signs, and elements, and must be familiarized with on a deeply personal level before we attempt to connect the dots.

The Basics Of Astrology Cards And Tarot Cards 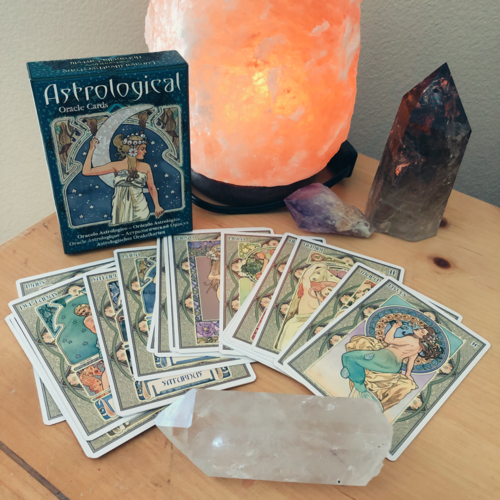 It is indeed helpful to know some basics.

Tarot decks contain 78 cards, 22 of which are known as the Major Arcana and represent deeper and more overarching themes in our lives.

The Astrology cards for each of the 12 zodiac signs are all Major Arcana cards.

The remaining 56 cards are known as the Minor Arcana, and they are divided into four suits that correspond to the four zodiac elements: wands (fire), pentacles (earth), swords (air), and cups (water).

We can add deeper layers of meaning to our tarot spreads by understanding the astrological associations of each tarot card.

Because each astrological zodiac sign has a tarot card, we can use our sign's tarot archetype for self-reflection or spiritual guidance.

For instance, if you're a Scorpio and draw the Death tarot card during a reading, you might consider themes of transformation or rebirth.

Even if you don't use it in reading, knowing which astrology card represents your zodiac sign can help you channel the energy of both tarot and astrology, as well as provide some mystical insight into yourself. 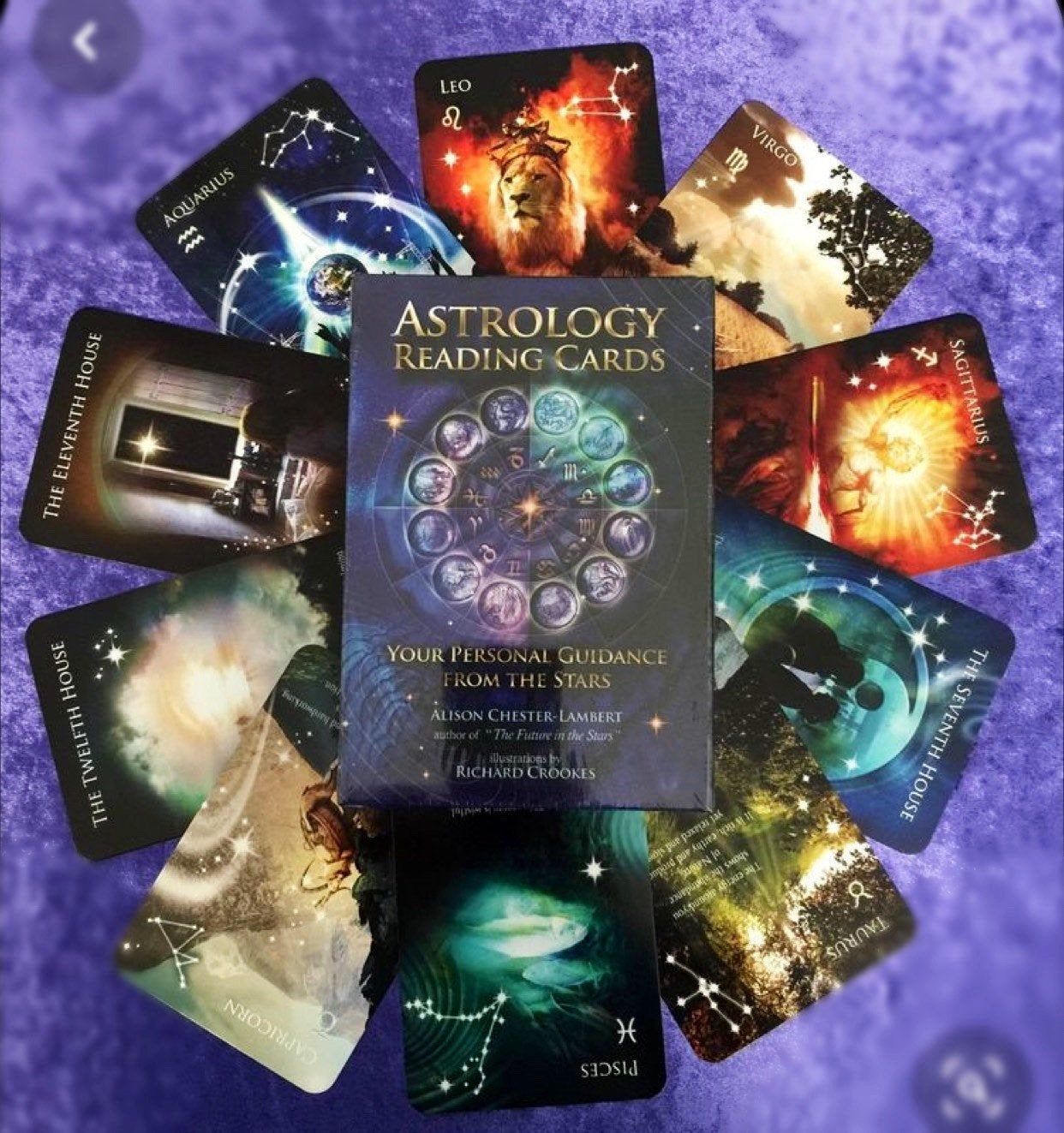 Knowing which Astrological cards represent which zodiac signs can greatly improve your accuracy when performing a Tarot reading, allowing you to provide more accurate descriptions of people.

Aries, a fire sign ruled by Mars, is paired with the Emperor card. Aries is a cardinal sign, so those born under it are action-oriented and born leaders, if not socially, then in terms of ideas and thoughts.

The Emperor card, Major Arcana card IV, is associated with fatherhood. The Emperor is a disciplined man who knows how to go to war and make decisions in the best interests of his kingdom.

Taurus, a fixed sign full of self-awareness, is associated with the Hierophant (card V), the interpreter of sacred mysteries. This may surprise many Tauruses, as I have yet to meet one who is not an atheist or skeptic.

Taurus people are dependable and stalwart, trustworthy sources of information, which is why they are the best at both spreading and shutting down gossip. Forget all other truths, a Taurus knows the truth.

The Lovers (VI) card represents the sign of Gemini, which is dual in nature and ruled by Mercury, the god of communication.

The Lovers, who are usually depicted standing beside the trees of life and knowledge, are all about communication and communion. The card means to teach you and has no "bad" side or "bad" one. I thrive, you thrive; I fall, you fall.

The Chariot is associated with the cardinal water sign Cancer. This card is about protecting ourselves. It's how we take control of our situations by setting boundaries and putting up healthy defenses to keep anything we don't want in our lives/energy bubbles out.

Cancer is one of the zodiac's most protective signs, so the Chariot's protective armor fits perfectly with its nurturing vibe and desire to provide safety and comfort.

Strength is associated with the fixed fire sign Leo. This card represents control and independence, but it also represents a balanced sense of power; the Strength card exudes compassion as well as control.

Similarly, Leo's regal energy is known for wanting to be the center of attention, but it's also generous and generous. This zodiac royal leads with warmth, passion, and heart, which perfectly aligns with the themes of the Strength card.

The Hermit is associated with the mutable earth sign Virgo. This card is about connecting with our inner wisdom, processing information internally, and quietly contemplating information so that we can move forward with a better understanding.

Similarly, Virgo is a sign that wants to think things through thoroughly and do things correctly. Its analytical and detail-oriented energy desires to improve the conditions of the world around it, and retreating Hermit-style is sometimes the best way to make those plans.

Justice is associated with the cardinal air sign Libra. This is another self-explanatory card; it's all about doing what's right, finding balance, and weighing the pros and cons to make the best decision.

Libra (represented by the scales symbol) is constantly seeking harmony and fairness, so justice is a major theme. As the Justice card suggests, having a balanced give and take is essential.

Death is associated with the fixed water sign Scorpio. Scorpios, like the Death card in the tarot, are often feared in astrology, but these archetypes do not always represent literal death or danger. It's more about the need for drastic and immediate change.

This card represents profound transformation and new beginnings that can only come with the end of one chapter. Scorpio, on the other hand, is the sign of transformation and renewal, and it is unafraid to seek the truth beneath the surface in order to facilitate change.

Sagittarius is a fiery fire sign, but they're also deeply philosophical and spiritual, and they're always looking for deeper meaning, so their energy complements Temperance's meaningful vibe perfectly.

Capricorn, the cardinal earth sign, corresponds to the Devil. Don't worry, the Devil isn't about evil; rather, it's about the material world, money, and consumption. It asks us to consider what we're giving up to others, either energetically or financially.

Capricorn, like the Devil card, is very focused on material wealth and success, which is why it is known as one of the most hardworking signs of the zodiac. Of course, it's easy to become engrossed in materialism, and the Devil encourages us to be mindful of such indulgence.

The Star is associated with the fixed air sign Aquarius. This card represents rebirth, revitalization, and the ability to have hope, faith, and wishes. Similarly, Aquarius is the visionary of the zodiac.

Just as the Star is associated with envisioning a better future, Aquarius is constantly using innovation to create new ideas that will benefit the collective well-being and usher us into a new era. Aquarius and the Star both remind us of the unimaginable possibilities that await us.

Are Tarot Cards Related To Astrology?

Tarot cards are rich in symbolism, but you may be surprised to learn that they are also closely related to astrology. Each zodiac sign, for example, is represented by a card in the Major Arcana.

How Many Astrology Cards Are There?

The deck contains 36 cards, which are divided into three sets of 12 cards each. The sets are known as Planet cards, Zodiac Sign cards, and House cards.

How Do Astrology And Tarot Work Together?

Tarot and astrology are both systems that can be used to gain insight into yourself, your life, and your future. While astrological divination is based on observable phenomena (moving planets), tarot is based on chance: cards are shuffled and drawn at random.

To sum it up, Astrology cards and tarot cards are inextricably linked. Because both of these cards can undoubtedly benefit people's lives, you can now purchase a pack of cards and attempt to comprehend the symbolism and meaning by referring to the information presented in this article.

We recommend that you seek the assistance of a professional astrology card reader for more in-depth reading assistance.