A Water-Rabbit year, 2023 begins on January 22nd (Chinese New Year) and ends on February 9th (Chinese New Year's Eve). In Chinese tradition, the sign of the rabbit represents longevity, harmony, and wealth. The year 2023 is expected to be one of optimism.

Chinese New Year, which typically falls between late January and mid-February, is considered to be the beginning of the Chinese zodiac year. As a result, if you were born in January or February in one of the aforementioned years, you may be a Tiger or a Rabbit.

To determine your Chinese zodiac animal sign, use the free calculator below or consult the chart.

Dates For Year Of The Rabbit 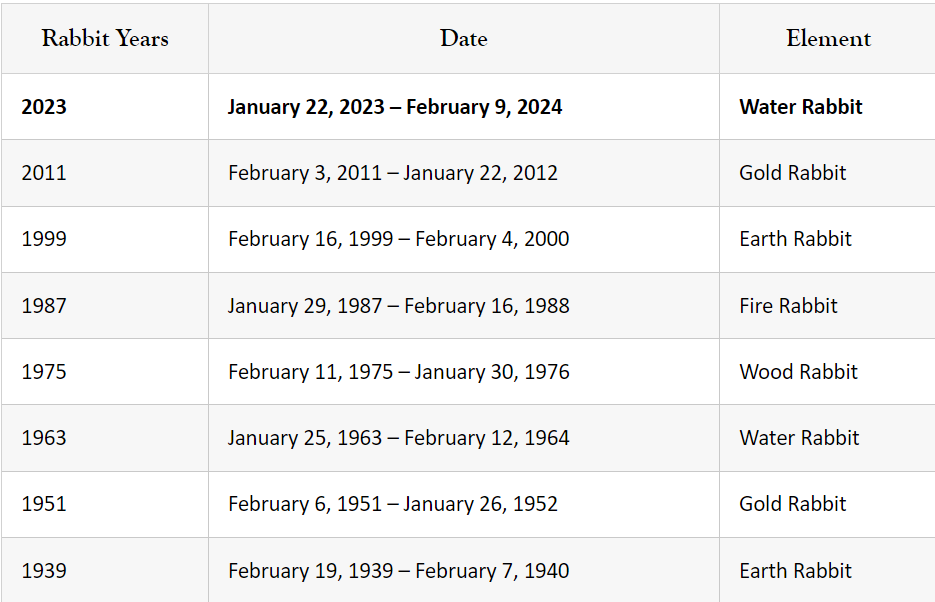 Screenshot of Dates For Rabbit Years

Chinese astrology predicts that people born under the sign of the rabbit will generally be gentle, quiet, elegant, alert, quick, skillful, kind, patient, and very responsible, occasionally reluctant to reveal their thoughts to others and prone to reality escape, but always faithful to those around them.

Male Rabbits are known for their constant politeness and soft smiles that give off the impression that they are trustworthy and honest. When faced with challenging obstacles, they never give up and instead are relentless in their search for answers. This indicates that they ultimately experience enviable success.

Female Rabbits are represented as having a pure heart in addition to a lovely and modest look.

Each zodiac sign is related to one of the five elements Gold (metal), Wood, Water, Fire, or Earth according to the Chinese five-element theory. A Water Rabbit, for instance, only appears once every 60 years.

According to a popular theory, a person's personality is influenced by the animal sign and element associated with their birth year. This implies that there are five varieties of rabbit, each with a unique set of traits:

Is Year Of The Rabbit 2023 Good For Having A Baby?

A favorable year to have a baby is 2023. This year is the Water Rabbit. Water in Chinese astrology represents longevity and tranquillity, while the Rabbit represents alertness, wit, caution, deftness, and self-preservation. It is said that those who are born in the Water Rabbit year will be fortunate and calm all of their life. (View 150 Common Chinese Baby Names: Meanings and Culture.)

The Rabbit is the only sign of the zodiac in Chinese mythology to share a home with the goddess Change on the Moon. Jade Rabbit, the name of China's first lunar robotic rover, explored the moon's surface in late 2013.

One of the most popular zodiac signs in Chinese astrology is the Rabbit since it is intimately tied to the Goddess of the Moon.

What're The Best-Suited Careers For Rabbits?

Rabbits are skilled in cooking, sewing, calligraphy, and painting because of their deft hands.

Why Is The Rabbit In The Chinese Zodiac Ranked Fourth?

According to legend, the zodiac Rabbit had a long, fluffy tail in antiquity. He enjoyed curling his tail around himself and sleeping soundly in his hole every day. He would put his head out when he was hungry and sluggishly nibble the grass near the opening of his burrow.

It didn't take Rabbit long to consume all of the hillside's grass, leaving a barren pit in its place. The wolf discovered the rabbit's home after seeing the slope's lack of vegetation one day. It was calmly waiting to ambush Rabbit by hiding in the grass not far from the hole's entrance.

When the dawn rose, Rabbit awoke famished and continued to eat the grass next to the hole as usual. Only then did Rabbit respond and kick his hind legs vehemently after the wolf chewed through his long tail. The wolf reacted violently to being kicked in the face by biting off Rabbit's tail with its razor-sharp fangs. The wolf was temporarily rendered comatose, and then it instantly began to pursue Rabbit.

A little white dragon came in between Rabbit and the wolf at this precise time after roaring from the skies. The wolf that was pursuing the rabbit was halted by him. Because of his instincts, Rabbit did not pause to consider the situation and instead used all of his remaining vigors to flee.

Rabbit eventually lost the ability to run at all. He seemed to see Ox standing behind the line, Rat on Ox's head, and Tiger behind the Ox just as he was going to take a little break behind a tree. Rabbit had unintentionally crossed the finish line of the zodiac sign race, it turned out. When he opened his eyes, he was surrounded by 11 creatures, including the small white dragon that had assisted Rabbit in escaping the wolf's maw. As a result, in the order of the zodiac, Dragon is ranked fifth and Rabbit is ranked fourth.