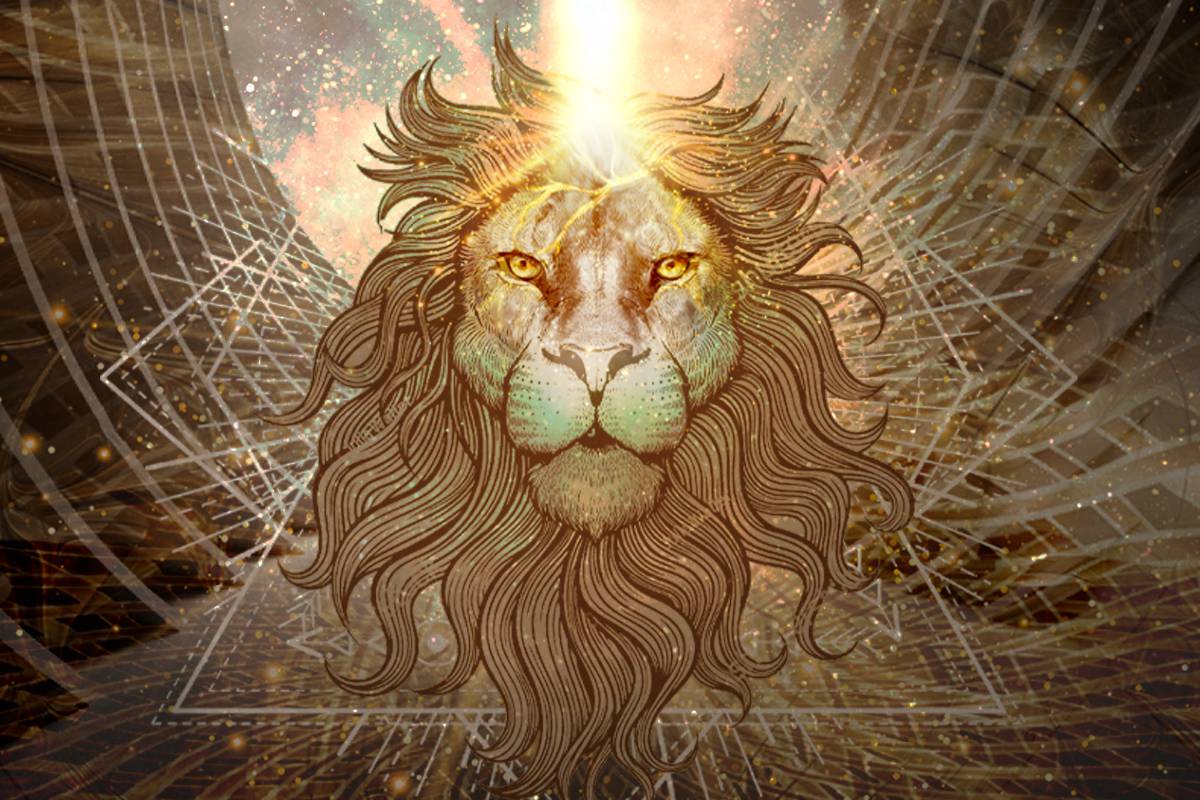 The mythical Lions Gate Portal meaning manifests and shakes its mane on August 8th, 2022, a day noted by ancients, astrologers, and numerologists alike.

The gateway opens wider from July 28 to August 12, although its strength is said to be at its greatest on August 8.

What are the Lion's Gate's origins, and how can you make the most of it?

Meaning Of The Lion’s Gate Portal

The title "Lion's Gate" refers to the annual alignment of Sirius, the brightest star in the night sky and also known as Alpha Canis Majoris, or the Dog Star, and the sun in Leo.

The power of the Lion's Gate rests in the cosmic synergy between stars, signs, and numbers.

The agricultural goddess Sopdet was worshiped as Sirius by the ancient Egyptians, who also connected the star's helical rising to the beginning of a new year and the annual flooding of the Nile River.

Sirius rises appropriately, heart forward. The heavens are ruled by Leo, the sign of assertiveness and expressiveness.

Leo has an unjustified reputation for being excessive, hogging space, and demanding more—a reputation that is more a reflection of their critics, those who can't bear to look in the mirror.

Since Leos believe they are entitled to pleasure and deserving of desire, they approach others with no reluctance, doubt, or sense of shame.

Leo energy offers timeless teachings in self-love. Leo doesn't settle for leftovers or inferior products, and neither should we.

Leo exhorts us to be brave to be free and satisfied in a world that requires us to be small, afraid, and devoid of fulfillment. "Caring for myself is not self-indulgence, it is self-preservation, and that is an act of political warfare," wrote author and activist Audre Lorde.

Leo reminds us that we are deserving of devotion, while the Lion's Gate permits us to desire.

Significance Of The Number 8

The number 8 is a representation of both karmic debts and success in numerology. Eight is a powerful number that symbolizes the fusion of the physical and the spiritual, as shown by the overlapping rings that make up the number itself.

The double dose of 8/8, the eighth day of the eighth month, predictably allows the spirit to turn the abstract into concrete and make our intentions come true.

The eighth house in astrology is connected to sex, death, and rebirth, as well as serious and serious scorpions business.

The eighth house represents both the infinite and the cyclical nature of life and death; the number eight is a sign of infinity turned up.

As a result, for the ancients and in line with themes of death and rebirth, the Sirius star disappears for seventy days each year, and the process of mummification takes roughly seventy days to complete.

The tarot's eighth card, Strength, represents the Leo sign and depicts a woman who is calmly walking with a lion while wearing a crown that represents infinity.

The transformation of animal instincts into focused power is represented by the number eight in this sense.

The feral becomes royal, strength becomes deft, and wildness becomes wise. The upside-down number eight shows that we all have unlimited potential.

We can consider the Lion's Gate to be the start of a new year, just like the ancient Egyptians did, and provide our comments on the past and goals for the future.

It's time to let go of forms and of the habits that hold us back from becoming. The Lion's Gate presents an opportunity to reconnect with our inner child and ask for advice on how to carry and care for who we once were and who we might still become because Leo is connected with kids, creativity, and play.

To fully experience the present, start each day with a meditation practice. By emptying your mind, you'll be able to receive messages and identify your desires.

Remember that you must first speak what you desire to receive it. You must first identify what has injured you to heal.

The Lion's Gate demands that we acknowledge and inquire aloud. Think about Leo Madonna's adage, "A lot of people are afraid to say what they want. That’s why they don’t get what they want."

They don't get what they desire because of this. Bravo, Madge. Go forth, star babies, and roar for what you want and wail for what you need.

The Significance Of The Day

According to astrologers, the Lion's Gate Portal boosts people's desires, enables them to manifest fresh concepts and goals, and strengthens their spiritual energy.

Numerologists also view the day as fortunate because the number 8 is associated with money, luck, and positive feelings. And when it is flipped on its side, the number resembles the infinite symbol.

How Can I Manifest During The Lion’s Gate Portal?

The following is a standard instruction on how to actively manifest at the Lion's Gate Portal. Manifestation can take many forms.

Align with your positive energy first, then raise your consciousness, even more, to concentrate on the Moon, stars, and planets.

Then, while concentrating on the words and precisely what you are generating with them, you can say your manifestations loudly, silently to yourself, or write them down on paper.

Write or speak your manifestation repeatedly until you feel it has made a permanent impression on the outside world.

After that, let go of all your expectations and go about your day with the belief that what has manifested is or will appear to be fact.

During this period, as part of your manifestation rituals, yellow crystals like vitrine and amber, as well as botanical and herbs, are excellent instruments for manifestation.

It is a good moment for manifestation and meditation at the same time, since we may use the portal's energy and attune to its vibration.

Leo is one of the most creative signs, so practicing meditation while it's sunny might help us connect with our creativity.

When Is The Lion’s Gate Portal?

Between July 28 and August 12, the Lion's Gate Portal is considered to be open. On August 8, which some people refer to as the cosmic new year, it is most powerful.

You shouldn't ignore the significance of the date being the eighth day of the eighth month (8/8).

The number eight is associated with riches, luck, and positive energy in numerology, where each digit has a plethora of meanings. When turned on its side, the number eight represents abundance and infinity.

The opening of the doorway, which unites the might of our luminaries in the sign of the Lion, happens every year when the new moon is in Leo.

According to astrology, Leo is connected to the lion's energy, which bestows a regal aura of bravery and pride.

It is preferable to approach the Lion's Gate Portal in 2022 as the start of a new year and to share our comments on the past and our goals for the future, just like the ancient Egyptians did.

Consider it a chance to get rid of any bad habits that might be holding us back from being the best versions of ourselves.

How To Make The Most Of Its Opening?

The question now is, how can you make use of all of this potent eight-energy? The following is a list of things that Budd and Earhart suggest doing the next time the gateway to Lion's Gate opens:

Lean Into Your Inner Leo

During the Leo season, and more especially, at the peak of the Leo season, the Lion's Gate portal appears, emphasizing the themes that are associated with this zodiac sign.

As a consequence of this, Budd advises channeling your inner Leo, regardless of whether you were born under this sign.

"Love, generosity, leadership, and creative expression are all contained within and represented by the sign of Leo.

"When the sun is in Leo, the entire world benefits from an infusion of these energies," she explains.

I think the best way to make the most of the Lion's Gate is to do Leo things and aim to intensify the natural energy of the moment as much as possible." When the sun is in Leo, the entire world benefits from an infusion of these energies. "

According to Budd, this is an opportune moment to concentrate on love, in addition to kindling the fires of your inner Leo.

She observes that "love is a crucial component of Leo's character, and the potential of the Lion's Gate," as she sees it.

She says that the Lion's Gate, which is thought of as an electromagnetic "portal," can connect you to the portal that is located within your own heart.

To enlarge and open your heart, Budd suggests that you "do things that provide delight during and just before the Lion's Gate."

According to Kaerhart, the moment to "review how you are currently exerting your power and evaluate the type of power you would like to yield in the future" is an excellent opportunity to take advantage of the Lion's Gate portal.

Because of this, you now have the chance to start manifesting what it is that you want to bring into your life.

As the number eight is symbolic of infinity, she cautions against acting hastily or concentrating on rewards that will only be realized shortly.

Instead, she advises us to "use your energy wisely and trust that rapid growth is in store so that we can prepare for blastoff."

Tap Into Your Spiritual Side

This passageway is a powerful spiritual moment, and tuning into your spiritual world will magnify the effects of this energy on you.

According to Budd, now is the time to engage in the spiritual practices that you enjoy the most, particularly in a group, since this can amplify positive energy and intentions.

"Getting together for ceremonies, meditations, chanting, yoga, dancing, art, time in nature, and so on can increase the energy of the Lion's Gate," notes Budd.

Getting together for these activities can also help you feel more connected to the Lion's Gate.

In addition, Budd suggests expressing plenty of appreciation during this time of year and sending your love out into the universe.

This is surely not the least important of his recommendations. "You can do this in meditation, in prayer, in dancing, with a ritual, with a notebook however it occurs to you," she explains. "You can even do it with a journal."

She goes on to say that if you send your love out into the universe, it will most likely come back to you multiplied by two, three, or even more.

You like to think of the Lion's Gate (and the Leo Season in general) as a period when you may stock up on love, joy, and appreciation for the coming months."

It is the right moment and the right season to learn what one's capabilities truly are," Budd stated.

It is beneficial to engage in activities such as leaning into love, working on whatever it is that you want to create, and practicing gratitude at any given time.

On the other hand, if you enter Lion's Gate through the entry on August 8th, you might just find out that your efforts will be multiplied more than you could ever have dreamed. This could be the case if you go through the entrance at Lion's Gate.