Karmic Debt 13 - Be Free Of Your Karma From The Past 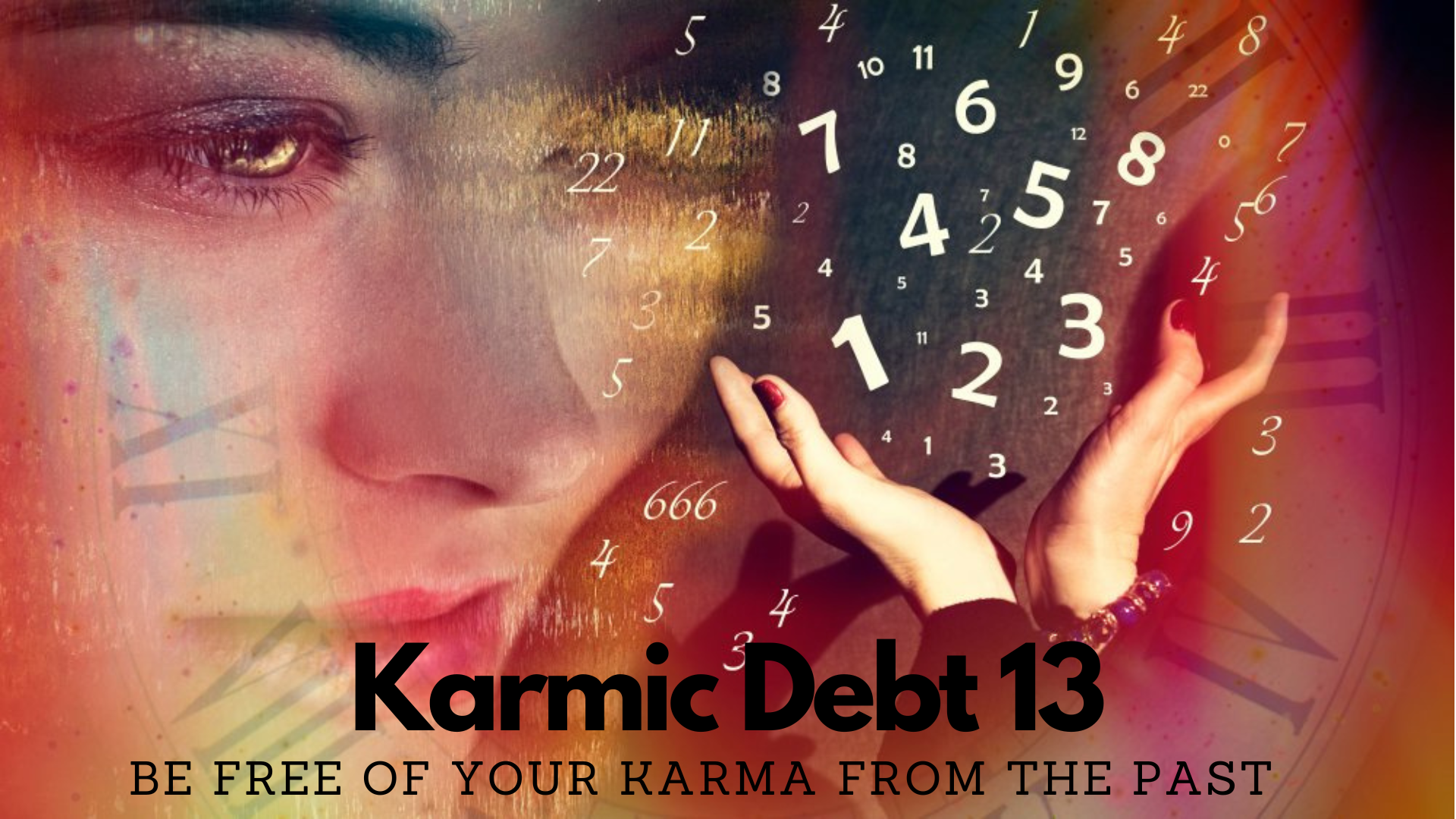 People commonly wonder, "What have I done to deserve this?" and they frequently fail to find an appropriate response. There is a simple explanation - karmic debt. A karmic debt is something that happened in a previous life for which you are now making amends.

And if it happens that you have Karmic Debt 13, it means that you're here to pay a debt for lazy behavior in a previous lifetime.

If you ignore this Karmic Debt Number, you may tend to encounter repeated failures and challenges in your present life.

Therefore, we highly recommend for you read this article as we will give you an overview of what is Karmic debt numbers all about and will provide you an insight into Karmic Debt 13 and how can you get out of this debt.

Numerology - How Do I Know If I Have a Karmic Debt?

Before we get into Karmic Debt 13, let us first go over a general overview of Karmic Debt for a more in-depth understanding.

Karma is a Hindu and Buddhist belief system that dates back thousands of years. It has a strong connection to another ancient belief known as reincarnation or the circle of rebirth.

According to these beliefs, an individual's soul reincarnates multiple times after the body dies, and the actions of one lifetime are known to have an impact on another.

Karmic debt refers to recurring patterns in your life, which are usually negative patterns or unresolved issues. For example, you could be constantly struggling with money, sabotaging your relationships, or avoiding personal responsibilities.

It enables a person to learn from their past mistakes and avoid repeating them in their current life. They can then break free from the cycle of reincarnation and find peace.

Furthermore, processing Karmic debt numbers in life indicates that the natives may have missed some important lessons that will be critical for their souls. Thus, in order to make up for these missed opportunities, the Universe provides them with the opportunity to correct these mistakes and shift these cosmic balances in the right direction by taking the appropriate actions.

Unlike most numerological associations, karmic debt is only associated with four numbers: 13, 14, 16, and 19.

There are two main ways to determine if you have a karmic debt. The first is to focus solely on an individual's birthday.

If you were born on a date that corresponds to one of the above-mentioned Karmic Debt numbers, you are automatically associated with that number.

The second method, on the other hand, involves calculating the debt using core numbers such as your life path number, destiny number, personality number, or soul urge number. 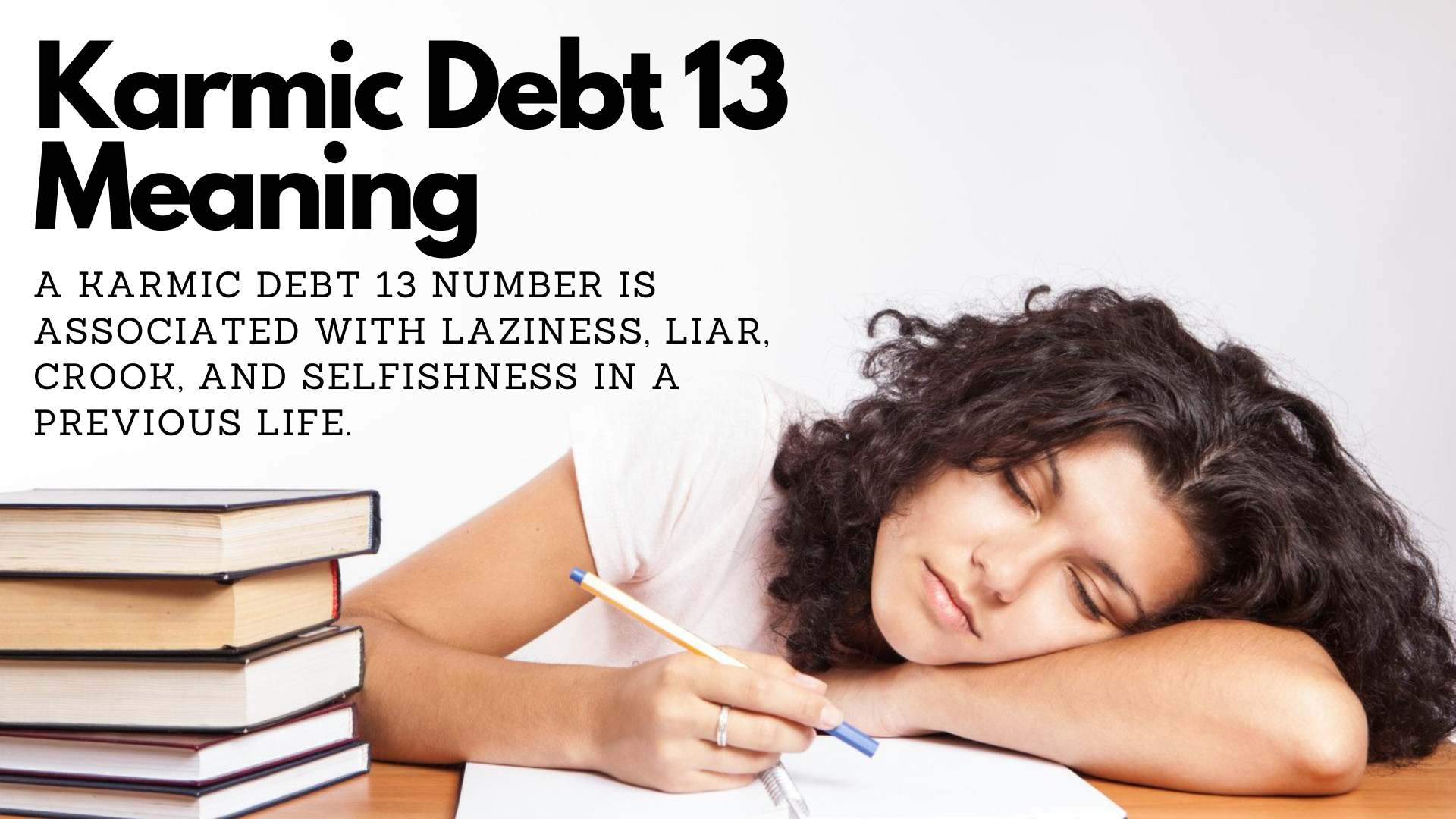 A karmic debt 13 number is associated with laziness, liar, crook, and selfishness in a previous life.

You may have to deal with blaming others and not accepting responsibility, being negative, as well as backbiting, being stubborn, and controlling. Holding yourself accountable is your karma.

People with Karmic debt number 13 usually have to struggle and work hard in order to achieve success and success. Obstacles stand in their way and must be overcome on multiple occasions. These natives may struggle to complete any given task because they will face numerous obstacles and issues.

This heaviness throughout the journey makes people want to give up too soon and become frustrated. Furthermore, people with Karmic debt number 13 may be unable to maintain the hard work and resolve required to complete the task and find a way out of problems and issues.

Along with it, this Karmic debt number is known to cause natives to lose concentration and engage in multitasking, an area in which these people struggle. As a result, they are easily distracted from their concentration and quickly become demotivated.

In numerology, the karmic debt number 13 causes people to take shortcuts and avoid completing tasks. They even avoid dealing with situations and proceed without any plans or organization.

Despite their consistent efforts, these people do not achieve success easily and experience self-doubt for illogical reasons.

When they scatter their energy in multiple directions, these people make rash decisions. However, with a motivating and never-say-die attitude, these people will make things better.

If you are constantly blaming one for your misfortunes, you are dealing with debt 13. Inexplicable idleness and persistent procrastination are also indicators that you must repay your karmic debt.

Other signs of an impending karmic debt include the need to be in control, being egocentric, and having recurring feelings that others don't value your input. 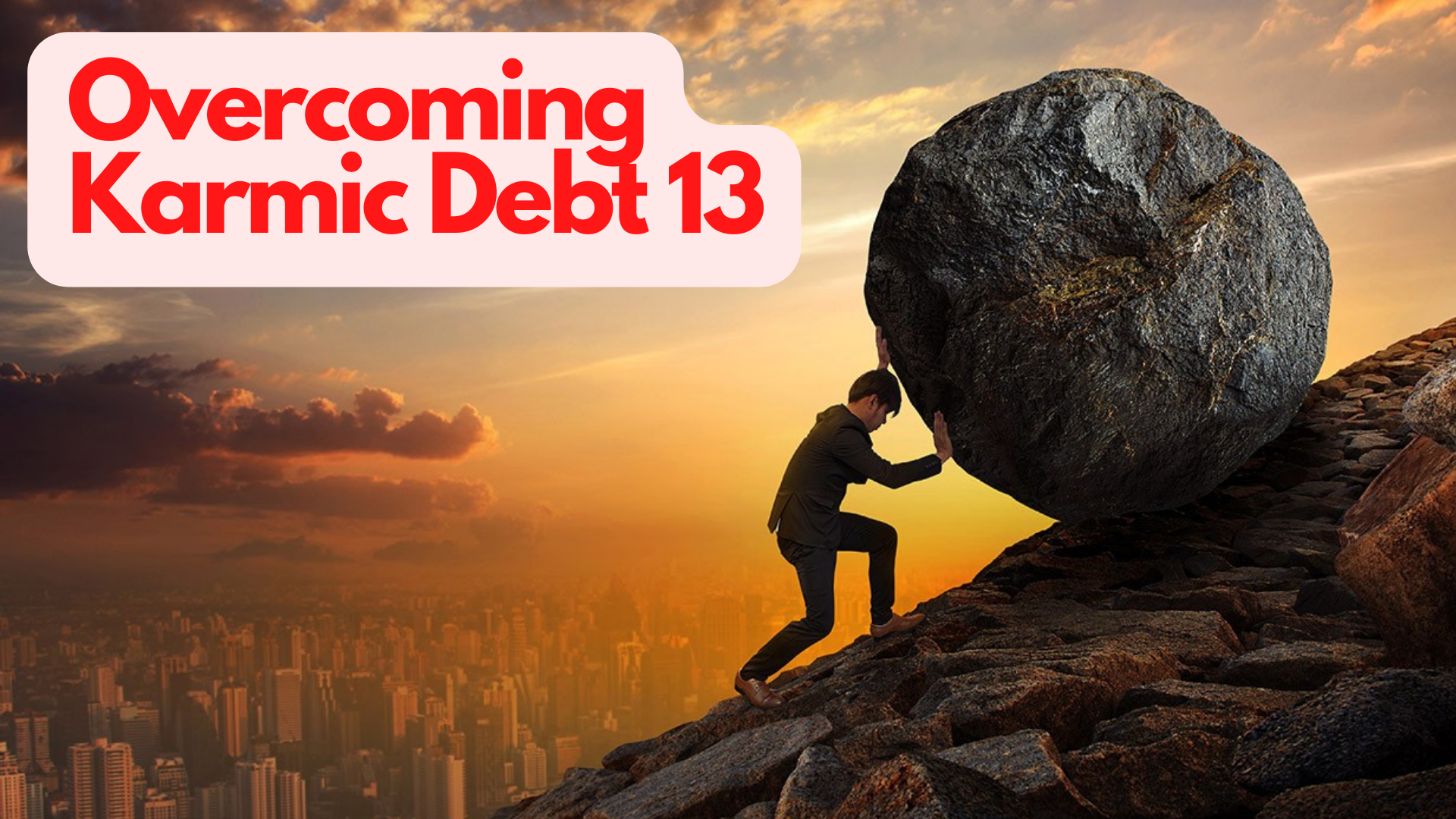 If you have Karmic Debt 13, you must repay a debt for laziness and selfishness.

To atone for it, you must prioritize the needs of others and encourage their positive development. You must learn to make space for others to shine.

Also. Being focused is essential for success with the 13. The 13 can be tempted to take shortcuts, but too often, easy success does not come, causing regret and the desire to give up.

As a result, one develops a negative self-image and believes that one is incapable of accomplishing much. Order is required for success with the Karmic Debt 13.

Maintaining a schedule, following through, keeping your environment neat and under control, and never procrastinating are all required.

The universe always gives us a chance to correct our mistakes in the numerology chart.

This means that, while it will be difficult, you can repay your karmic debt if you remain consistent, truthful, and passionate in your pursuit of change.

Always look deep within yourself for your failures, as this is the best way to deal with idle thoughts that have the potential to destroy you and everyone around you.

What Is Karmic Debt Number?

We are given an additional load or burden during our rebirth in order to rectify the mistakes we made during our lifetime, which is known as Karmic Debt. Karmic Debt is associated with the numbers 13, 14, 16, and 19.

Is 13 A Karmic Debt Number?

How Do I Pay Off Karmic Debt?

The only way to pay off this debt is to make amends for the mistakes you've made in your life. If you recognize and address your current Karma, you will be less likely to repeat these destructive patterns and will be able to put an end to them before your subsequent lifetimes.

To summarize, Karmic Debt 13 indicates that you were too self-indulgent, capricious, and avoided responsibility at all costs in your previous life. A person with the Karmic Debt Number 13 will have to put in a lot of effort, time, and resources to achieve their goal. To do so, they will have to overcome numerous ups and downs and obstacles.

Furthermore, it is critical for Karmic Debt Number 13 to keep going, to remain motivated and driven for success, because if their spark is ignited, they will be able to persevere until the end. This is your chance to break the cycle and focus your efforts on hard work.