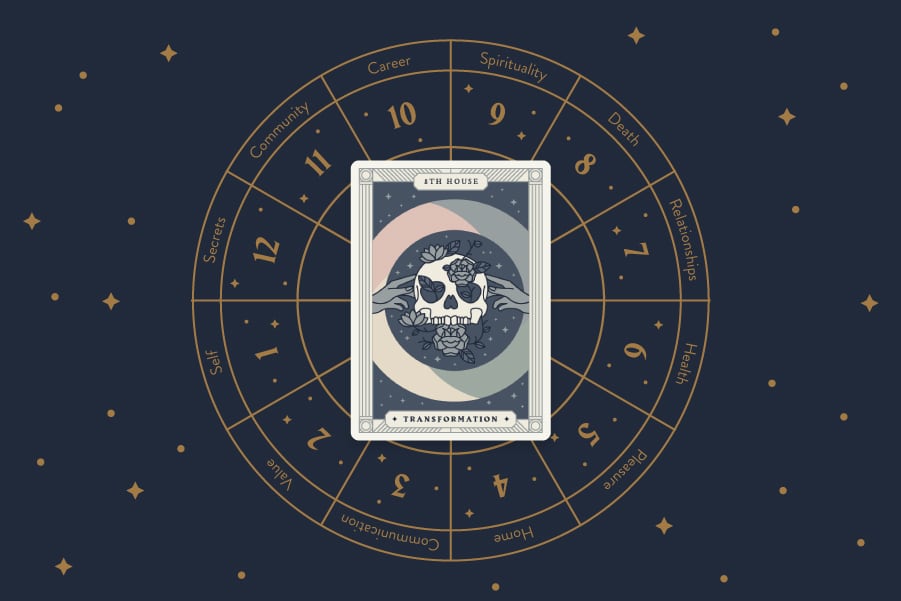 They’re Slytherin. They’re armchair metaphysicians. They are psychic through smell. They’re brilliant in a crisis. In an emergency room environment, the Eighth House person will be a towering force of calm strength and positivity, making cheery small talk to lighten unavoidable waiting times and taking care of must-dos. But you cannot rely on them to behave “normally” in a mundane situation. They’re like the sergeant in The Hurt Locker who was super-chill when defusing a bomb under enemy fire but severely anxious in a mall with muzak. They’re comfortable with what the F.B.I. calls “complex terrain.”

They have all-access passes to places others don’t know are in existence. Their boundaries are borders, heavily guarded.

What Does The 8th House Represent In Your Birth Chart?

Each house governs a distinct aspect of our lives, and when an astrologer reads your chart, they consider the meaning of each planet, as well as the house and sign in which it is located, in order to anticipate any difficulties or pleasures you may encounter throughout this lifetime.

Many people regard the 8th house to be a spiritual teacher, and this is true. It governs how we get money, as well as how we receive the assets of our life partner/wife/husband, among other things.

Death is not always a literal concept, but may also be interpreted in symbolic terms. For the most part, it may be a sign of transformation. In the eighth house, according to Labryinthos, "a person with certain planets in the eighth house may be artistically inclined to death, or even pulled towards some type of gloomy aesthetic."

Everyone Misunderstands The Eighth House In Astrology

For example, pregnancy terminations are a classic Eighth house motif, as is sexual and mercenary employment (particularly when Venus or Mars are in the eighth house), as well as hyperacuity instincts and sensitivity to power dynamics (especially when Venus or Mars are in the eighth house). This group doesn't require the services of mediums or seances. The cognitive equivalent of a speed dial is full of different dimensions for them to access. They believe that all relationships are transactional, and that genuine merging can only occur with the Source Vibe/God/Qi. Whether they realize it or not, they believe this. They are determined obsessives who can fall to paranoia, but you can trust that it will be paranoia based on a thorough study. Their sleuthing abilities are second to none.

People accuse them of being distant or taciturn, yet half of their interests are taboo subjects, and the other half is kept a secret from the public. Their presence and anti-fragility are derived from sources that they will never reveal to you. At the very least, you may be certain that they will never reveal your personal information. They don't give a damn whether other people think they're dull or that they live a tranquil existence. Their skills include executing large-scale makeovers and changing various objects. People who live in the Eighth House are drawn to people, circumstances, and businesses that are undergoing transition. When they come into contact with stagnant energy, they become caustic; this is most likely a protection mechanism. Their sarcasm comes out when they become complacent.

In what ways does the Eighth home stand out from the crowd? In general, the Sun, Moon, and a personal planet are present, but the person's governing planet is given three times the weight it would otherwise get. The eighth house contains a stellium, which is a lucky sign. In addition, you're supernaturally wealthy, and most of your relationships are based on supernatural elements. I'm not serious. However, while the "death" component of the Eighth house might be frightening, it really implies that those born under this sign can face their mortality with the same level of realistic coolness that they bring to every other situation in life. Each and every ending has a beginning someplace else, and there are two billion galaxies in the cosmos, which they are well aware of.

It is easier to grasp the term "Other People's Money" as resources obtained through the efforts of others than it is to understand it as money. Even though people born under the Eighth House are not typically attached to their social standing or the perception of being wealthy, they are emotionally attached to their money, particularly when it comes to shared funds in relationships, which is always a flashpoint, as well as to taxation and debt. Their hustling is slowed by a lack of inspiration. Someone or something must be actively developing something in order for them to get compensated. The fact that they have a 'Sex' component does not imply that they are sexually motivated individuals with strong libidos. They can, of course, be. However, the heightened awareness of sex and power relations that persons born under the Eighth House have does not always convert into an active sex life for them.

Additionally, the 'Occult' that makes up the standard litany of Eighth House worries is incorrectly understood. Many people believe that "occult" refers to organized esoteric rituals, particularly those involving nudity and enormous pentagrams. However, this is not the case. However, the word derives from the Latin "to conceal," and it relates to dimensions that are concealed from our view. People born in the eighth house are interested in studying about the occult as soon as they graduate from their early reader books. As children, they flocked to the 130s department of their local library, which had books on parapsychology, religion, astrology, religion, dream analysis, and other topics.

What are your thoughts on the Eighth House in Astrology?