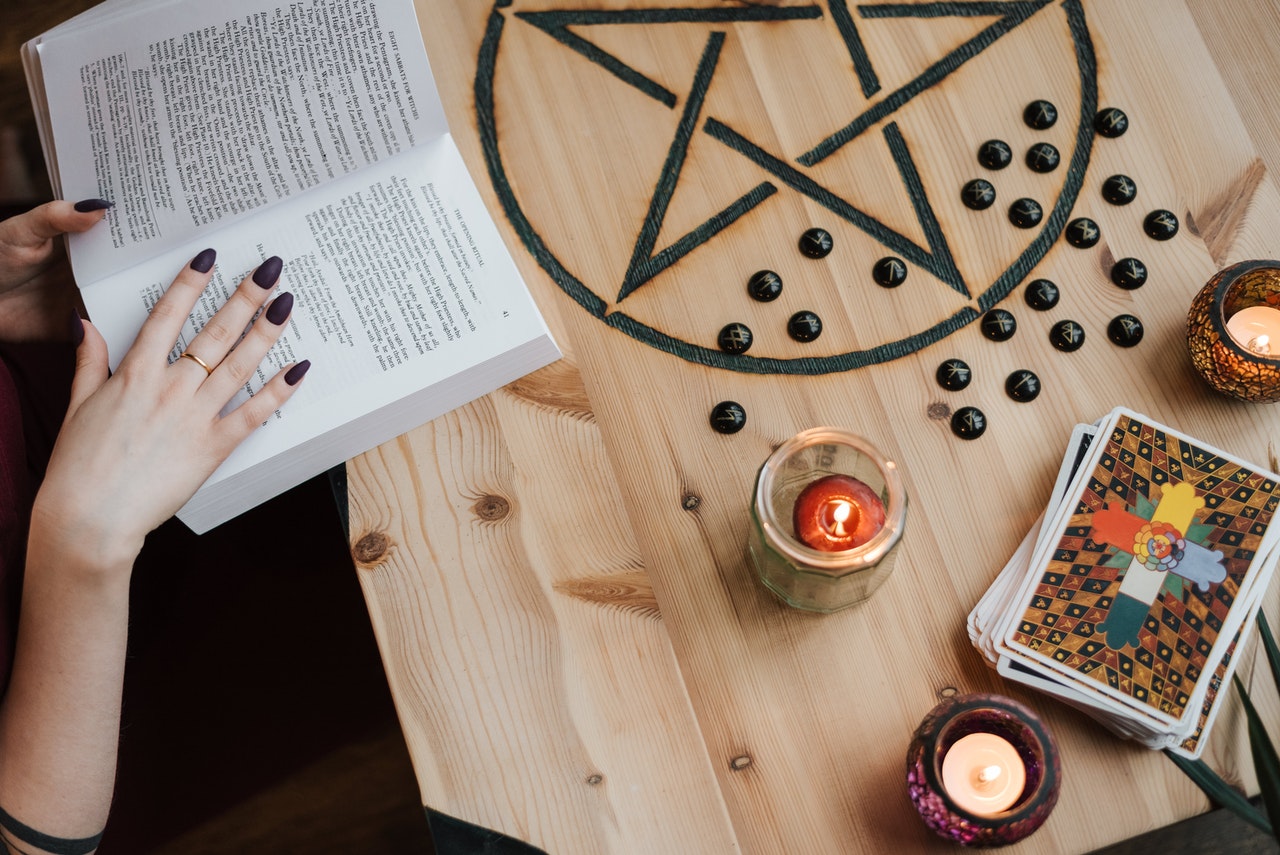 In the Major Arcana, the Magician represents methodical activity. The magician tarot card meaning represents how the creative process transforms an intangible idea, a flash of inspiration, or a concept into a concrete object via action.

The four symbols on the table correspond to the four tarot suits.

All of them are used by the magician in his process, which is a nice reminder of how much abundance can come from a well-balanced existence.

The foreground and top of the card are bursting at the seams with rich blooms.

The Magician is also, well, magical. After all, he's hard "The Worker."

The card might alternatively be dubbed "The Alchemist," because the symbols on it have alchemical connotations.

His outstretched arms serve as a link between heaven and earth. He's about to transform lead into gold.

To be successful, the magician must remain focused and present, allowing his body to act as a conduit for thoughts.

His body acts out the relationship between heavenly inspiration and the corporeal world, or earth, with his arms spread diagonally.

He is a living embodiment of the creative process. There would be no way to connect the two without him, and no means to build "something out of nothing."

As a result, The Magician exemplifies the seeming contradiction of creation.

You must be present and receptive to new ideas while remaining anchored in reality and eager to take action to bring the concept to life.

The magician tarot card meaning has a dynamic and exhilarating edge because of his openness, attention, and sense of movement.

This card encourages the querent to be open to inspiration and to lose oneself in the effort that it demands.

When this card appears in a reading, it denotes a period of immense activity and promise. The tools are all on the table, and the scenario is already beautiful.

The goal of this card is to keep the circumstances in place that allow creativity to thrive.

The Magician's ability to thrive is due to a combination of experience (he is no beginner), awareness (he must be present to channel his thoughts), and action (doing the effort to really build anything).

The magician tarot card meaning denotes a moment when one should proceed with confidence and faith in one's talents.

False modesty and hesitation are just as harmful as arrogance and pretense.

The magician must, above all, actively create. Allow something other than ego to show through your work as you learn by doing.

The Magician frequently represents our first step out on our own, when we realize the vastness of the world's possibilities.

Consider how exciting it was when you graduated from high school, got a job, and finally had your own money; the world was your oyster, and The Magician embodies that same spirit. 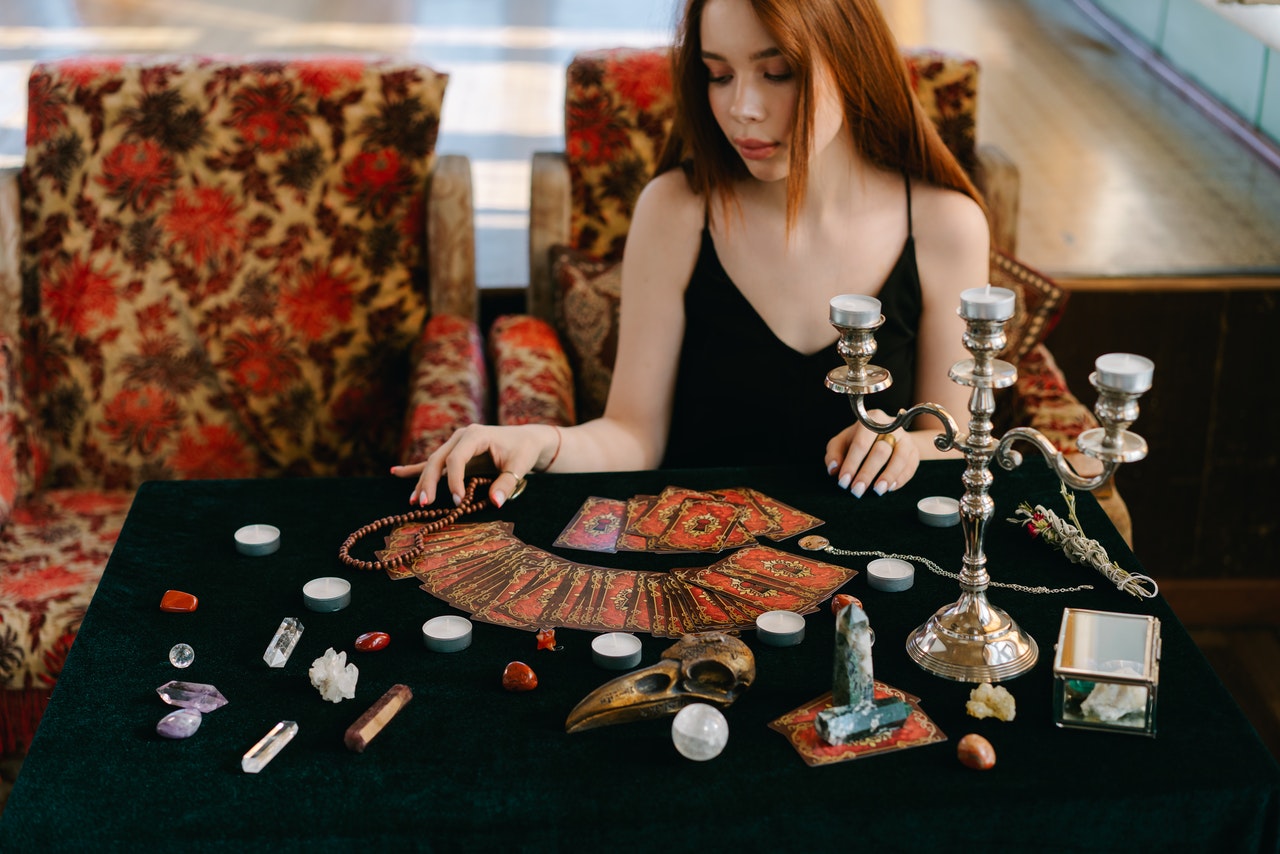 A Woman Playing with Tarot Cards

Is the Magician a love-themed tarot card?

This is a common question among those who choose this card during a love reading.

The Magician tarot card frequently waltzes in and takes you off your feet since he or she indicates someone suave and attractive.

This is a whirlwind relationship that feels like a fairy tale, in the true magical sense.

It will happen shortly if it hasn't already. Will this partnership be able to withstand the test of time?

The Magician tarot card may also symbolize a manipulator, someone who utilizes their charisma and personality to deceive people who fall under their spell.

What does your gut tell you?

To figure out what the magician's actual goals are, look at the cards around him. Regardless, this is going to be a life-changing relationship. 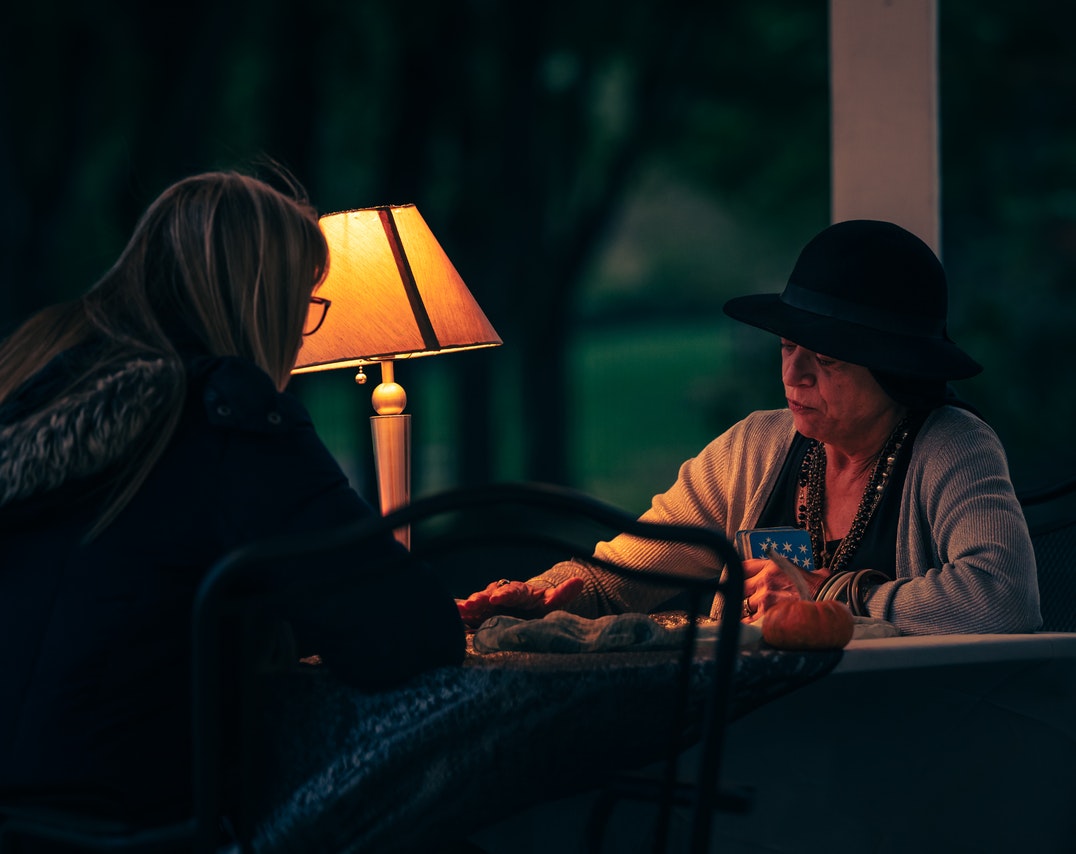 A Woman Reading Tarot Cards To Her Client

When you work with The Magician, you'll gain the knowledge, resources, and motivation to realize your goals.

There isn't anything you don't have right now. As a result, the magician might also be referred to as a Master Manifestor.

Because you have all of the resources you need at your disposal: spiritual, physical, mental, and emotional, manifesting your wishes is achievable.

When you combine your spiritual and physical energy, your power to materialize will skyrocket!

Combining these technologies in a way that enhances the impact of what you generate is crucial. Here you will find alchemy in its purest form!

A chance has presented itself for you to pursue a notion about which you have recently had an epiphany.

The only way to bring your dream to fruition is to take action, and the seed has bloomed.

You've come this far in your life thanks to the skills, knowledge, and abilities you've gained along the way, and whether you realize it or not, you're ready to put your ideas into action.

Your goals must have a spiritual component to them. Otherwise, you'll fail since you're solely motivated by ego, money, reputation, and celebrity.

You have a one-of-a-kind opportunity to materialize the future you genuinely desire when your daily activities are in tune with your Higher Self.

When you're clear on your "what" and "why," The Magician can help you take creative action.

You'll need to pay careful attention and concentrate your efforts if you want to achieve anything.

Make a point of emphasizing that one item that will get you closer to your goal and keep you on track.

If you actually want to achieve something, get rid of anything that might divert your focus away from your objective.

Schedule your day in a systematic manner to guarantee that you stay on track and finish your tasks. 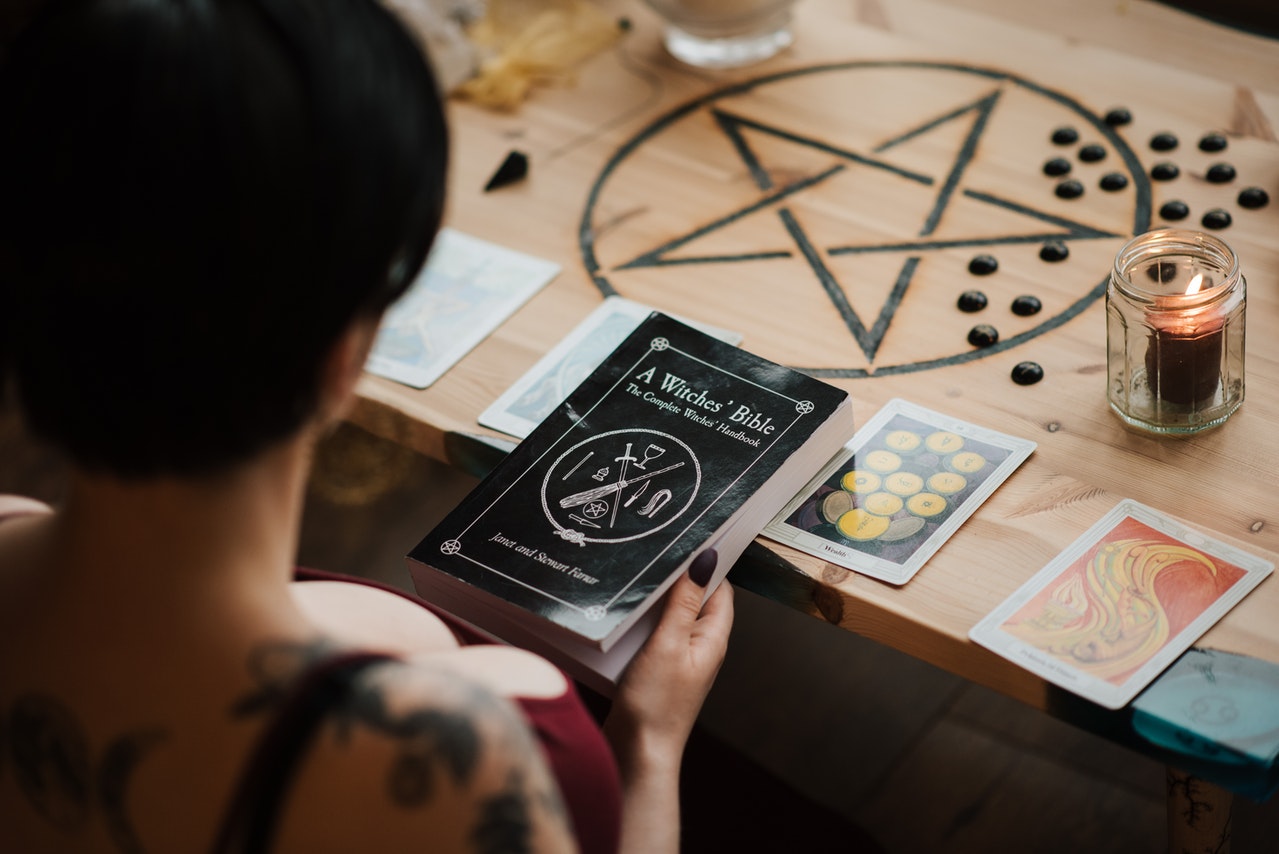 You're about to become well-known! The Magician is a strong, well-balanced, and successful figure.

Everyone wishes they could generate their reality in the same manner that The Magician does.

As you effortlessly flow through hurdles and overcome barriers, people and friends will draw toward you.

Is there any behind-the-scenes gossip or manipulation in your social circle? Someone attractive may have a hidden goal that isn't in your best interests.

Is this a genuine friend? Alternatively, you may need to invest more time and effort in your social life. Remember what you have to offer to others!

The Magician Tarot Card Yes Or No

The Magician is hinting that the answer is a resounding 'yes.'

Because it is all about manifestation, desire, and willpower, this tarot card is the most encouraging to come across during a tarot reading.

The Magician may be seen as a message to keep pushing forward with your goals and to never doubt your abilities.

The magician personifies manifestation at its most intense level. It wants you to recognize that you are the creator of your own reality.

When the magician shows up to stand during your tarot reading, it's a sign that you should start writing or scripting whatever you're working on.

Because believing that your wish has already come true is such an important part of manifesting, writing things down or even creating a mood board may be beneficial!

When a magician is pulled in the other direction, it generally represents the word 'no.'

It means you've started to doubt your own abilities and are straying from the path that will bring you to your ultimate goals.

It's time to rediscover your abilities and design a plan to capitalize on them.

The magician, on the other hand, typically connotes a strong sense of trickery and doubt.

Due to a lack of confidence, you may find it difficult to pick which course to choose at this point.

In a work-related reading, the Magician denotes a high degree of expertise in your industry. It implies that you are well-prepared for your chosen profession.

If you're worried, remember that you already have the abilities and tools you need to complete your work.

Others see your abilities; all you have to do now is embrace your self-assurance.

This is an excellent card to have on hand when looking for work. It's a sign that you're heading in the correct direction. In fact, be ready to get the job you want.

It's possible that a lack of confidence or expertise is at play in workplace confrontations.

A "difficult" employee, for example, may just require additional resources or reassurance. Policies and procedures might be a little bit ambiguous at times.

You or a coworker may be hesitant to perform well at work for fear of seeming unqualified.

This is especially true in a professional atmosphere where results are closely monitored. Make sure everyone understands what's going on.

Pay attention to what your team needs. In rare circumstances, the magician may advise enlisting the assistance of a professional.

The magician may use what is already present to create magic. This makes it an excellent card for individuals in charge of resources or product development.

Someone who works in the nonprofit sector and promotes community resources is an example. Alternatively, an artist or maker who creates physical goods.

It may also mean someone in authority behind the scenes in politics. It might be a signal to concentrate on honing your talents in order to become an expert in your industry.

What Does The Magician Tarot Card Represent?

The Magician represents the intersection of the physical and spiritual realms and is associated with energy, potential, and the expression of one's wishes.

What Does The Magician Card Mean In Love?

The Magician tarot card in love, like its overall meaning, signifies manifesting things. Love, talent, creativity, passion, and dedication will lead to success.

What Number Card Is The Magician?

A Magician is associated with the planet Mercury and has the number One - the number of new beginnings and opportunities.

When you come across the Magician card in a tarot reading, you are presented with a limitless amount of potential and options.

When you obtain this card, it's a sign from the universe that you should be positive.

You will get the energy you send out into the cosmos. As a result, if you exude optimism, nice things will come your way.

Meaning of the magician tarot card that links you to endless possibilities, both personally and on a higher level with your higher self.

It can be a terrific card in a variety of ways, and just because it's reversed doesn't always mean it's meant to be negative; it might just mean you haven't realized your full potential as a person.