Pisces And Virgo Compatibility In Sex, Love, And Life 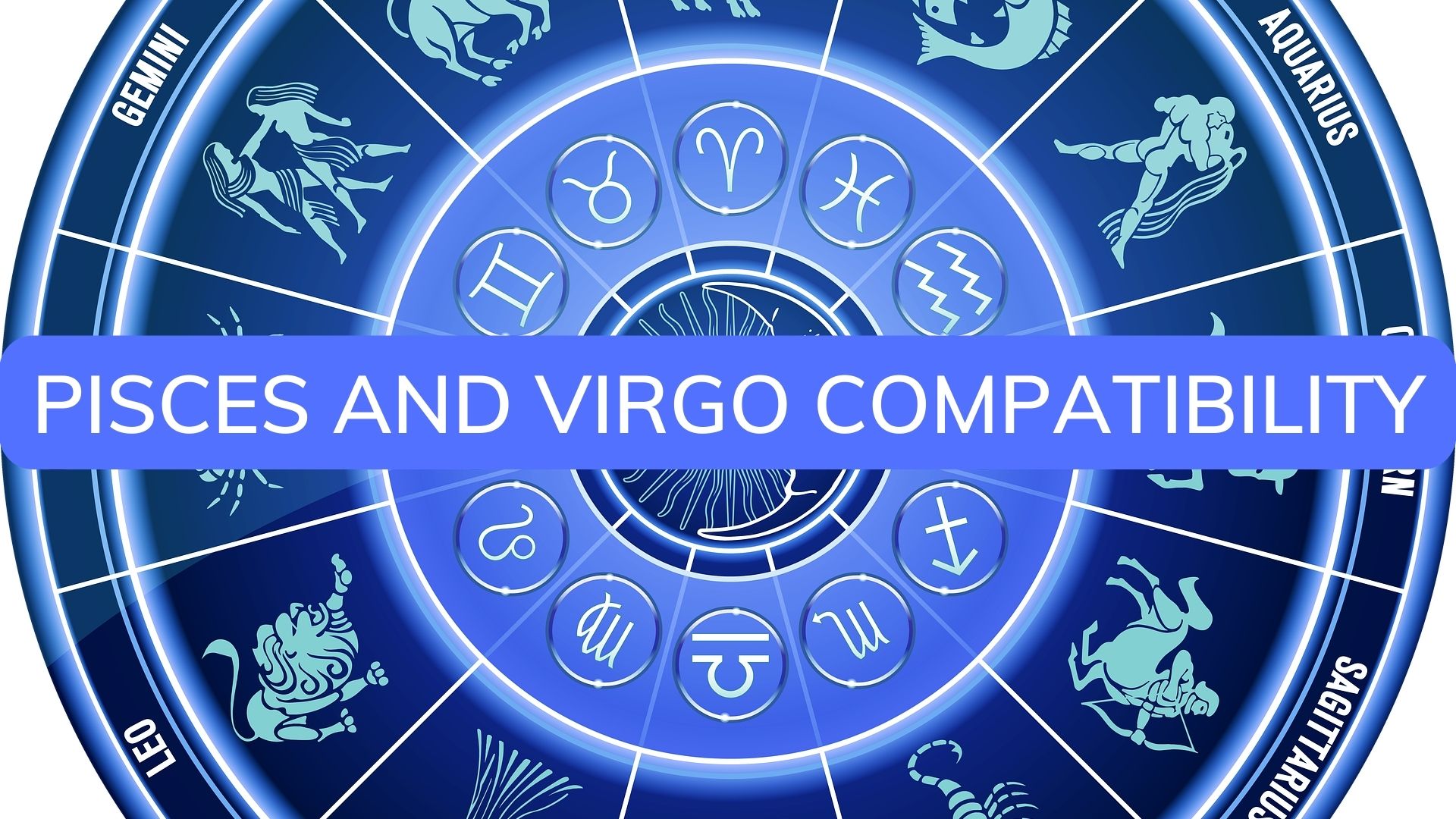 Are you looking for Pisces and Virgo compatibility? Being opposite signs, these two are aware of and wish to possess the attributes that the other lacks. Pisces is happy to see Virgo take a more aggressive and leading role because they are more open.

Virgos are exceptional organizers of their minds. They have a remarkable capacity for planning their living quarters, money, and work duties. They are adept at swiftly finding comprehensive knowledge about a wide variety of individuals, places, and events.

They also have a natural talent for maintaining their physical health via proper nutrition, exercise, and rest. They don't have a reputation for fantasy indulgence and tend to be frugal with their money.

They can, however, find it difficult to unwind and let go since they are so careful.

While Pisces possesses both opposing and complementary qualities, They may have a mess of things, but it doesn't appear to worry them much. They enjoy living in orderly disorder because it allows them to conceal their goods and secrets and arouse intrigue.

Instinctively, the fish realize they might benefit from less daydreaming and procrastination and from improving their capacity to commit to long-term goals. On the surface, the fish don't think they desire any of Virgo's characteristics.

They may not want to acknowledge the necessity of cultivating these Virgo attributes, but they are subconsciously aware of it. They are very interested in Virgo, but because they know what they don't have, they may also feel a little insecure and uncomfortable around them.

Virgo appears to be defying Pisces to keep up with their methodical and effective methods. Yet, because fish don't value aggressive competition, such strategies might easily drive them away.

Pisces And Virgo Compatibility In Term Of Relationship And Marriage

Virgos may save on furnishings and apparel, but when it comes to their health and medications, they will spare no expense.

They are realistic and practical people who enjoy sharing their wealth of factual information and valuable discoveries with the fish, who does not always approach life with such pragmatism.

Pisces finds it refreshing that Virgo can listen to them since they are usually the ones who offer comfort and listen to others.

Pisces likes to share their money, but Virgo does not, so there may be some financial difficulties. Virgo could view Pisces as being immature, irresponsible, and giving money to friends rather than borrowing it.

Pisces, on the other hand, can think that Virgo is overly preoccupied with their financial stability and see this as a restriction on their freedom to be who they truly are.

Emotional Compatibility Of Pisces And Virgo

The Virgo sign's major weakness is being too critical and annoying to its mate. Because Pisces can't stand being harassed, they may react angrily or stubbornly by making an effort to do everything that Virgo condemns them for.

Pisces may also decide to use addictive substances to numb their feelings or withdraw into daydreams and stop talking, getting angry and bitter behind your back.

Virgo must be careful not to be too demanding and critical of their partner if they want to keep the tenderness they see in them.

Meanwhile, Pisces must understand that maintaining secrets would seriously ruin their relationship. Pisces may be hiding things from others for no other reason than that they feel safer doing so.

They must understand that Virgo often just cares for them because he wants them to be content. They have to confess that while they are not exactly great at taking care of themselves, they do occasionally need to be looked after by someone who cares about their mental welfare and peace of mind, like Virgo.

These two are adaptable and like exploring new places and talking in depth about their experiences. Allowing Virgo to lead and direct the relationship can make them feel more at ease because they may become uneasy when there is no clear direction for the union.

Since they are smart, quick, and practical, Virgo will be happy to help Pisces talk about their problems, dig deeper into them, and come up with a solution.

Percentage Of Pisces And Virgo Compatibility

Here is the percentage compatibility of Pisces and Virgo.

Pisces might be more likely to lie and hide what they want, but Virgo is honest by nature.

Virgo tends to overthink their emotions, whereas Pisces is more passionate in their expression.

They will engage in a lot of intriguing talks and explore a wide range of topics because they are malleable.

They both appreciate kindness and sensitivity, but Virgo loves efficiency and order far more than Pisces, who is more at ease in the dark.

Given that they are both providers in bed and that their opposite signs generate an irresistibly magnetic relationship, they can have a great deal of mutual pleasure.

Virgo won't genuinely assist Pisces to overcome any severe trust difficulties that they may have. They must both feel safe and confident enough to be open and honest with one another to have a successful relationship.

Although their beliefs are at odds with their actions, both of these spouses will readily succumb to dishonesty. If one of the couples lies, it might be torturous for them both.

Fortunately, they are both aware that maintaining some concealment could rekindle and intensify their romance. Because of this, they usually go beyond short periods of closeness to build a stronger sense of trust in each other.

Virgo might be irritable when Pisces does something from a fairy tale, yet they will still do it out of curiosity. Since Mercury is their ruling planet, they have a strong desire to experience everything that Earth has to offer.

They could realize the beauty of life they were completely oblivious to once they entered the mysterious realm of Pisces.

When these two are together, they give each other the impression that everything is possible, since Pisces sees unlimited possibilities just as well as Virgo makes things happen and has a superior grasp of reality.

The Biggest Potential Problem Area In A Virgo-Pisces Relationship

Neither is particularly obstinate, but they may be if the point of contention is something they are both genuinely passionate about. For instance, Pisces occasionally forgets what day it is, but Virgo is usually rigid about sticking to a plan.

While Virgo can learn to let certain things slip, Pisces will need to learn how to be more considerate of their partner's time.

The tension between truth and fancy is still another problem. In the “real world,” where there are obligations, duties, and issues that need to be resolved, Virgos reside, by Kiss.

Pisces tend to live in a dream world, where they may “escape” the chaos of real life.

A Virgo could become quite irritated with a Pisces if they are off in a dream and may not enjoy their “delusional” thinking. A Pisces would advise Virgo to quit worrying over the small things and go meditate,”

Here are the pros and cons of Pisces and Virgo compatibility.

Pros Of The Pisces - Virgo Relationship

The Pisces and Virgo horoscope match is very calm and pleasant. They both understand what they want from the relationship and are willing to give it time to develop in that direction.

The Virgo sign, with its realism and wisdom, offers Pisces's idealistic ambitions direction. On the other hand, Pisces urges Virgo to feel more deeply and to express those sentiments freely.

The Virgo, who works to preserve the Pisces's innocence in life, guards the soft and innocent side of the fish.

The Cons Of The Pisces And Virgo Compatibility

Sometimes, Virgo's controlling and perfectionist nature is too much for Pisces to endure. The Fish loves to live in a fantasy realm, but Virgo's icy logic and svelte practicality sometimes threaten to drag it back to reality.

Because of this, Pisces becomes resentful and struggles to perform at its best. Because Virgo does not regularly communicate their emotions, the emotional Pisces may feel insecure as a result.

The fish can feel neglected and undervalued as a result of this. Virgo will feel helpless and irresponsible due to Pisces's daydream attitude toward life.

This sign can't work well without reality and realism, and Pisces's idealistic view of life goes against those same principles.

Pisces And Virgo Will Be Completely Loyal To Each Other

Since Pisces is one of the zodiac's most sensitive signs, abandoning their spouse would seem like betraying themselves. Fortunately, Virgo shares this sentiment.

Virgo is a trustworthy, stable sign that is ruled by the planet Mercury, which also regulates reason and verbal exchange. Because of this, Virgo has no interest in lying or cheating.

Pisces And Virgo Are An Unorthodox But Harmonious Pairing

These signs may first appear to be completely different, but in this instance, each sign's advantages and disadvantages counterbalance the peculiarities of the other.

If Virgo is willing to be vulnerable with Pisces and Pisces is willing to accept Virgo's methodical approach, these two can make a strong marriage.

What Is Pisces And Virgo Compatibility In Soulmates?

Perfect soulmates are Pisces and Virgo. Since Virgos are practical and Pisces are incredibly creative, you match in nicely since opposites attract.

Why Do Virgos Love Pisces?

Virgo and Pisces are compatible because they can firmly connect and merge. There is a great deal of respect between these zodiac signs.

Are Pisces And Virgo Excellent In Bed?

In bed, Pisces and Virgo will feel completely at ease with one another. These two signals emphasize open communication and trust, which promotes a pleasant and emotionally connected sexual relationship.

The axis of Venus and Mercury's ascent and descent are represented by the signs of Virgo and Pisces. Because of this, they are the zodiac's most difficult spouses and most loveable ones.

They must strike a delicate balance between reason and emotion, both separately and in the context of their relationship.

As a result of this couple's malleable quality, which makes them changeable enough to swiftly end the relationship if they aren't happy, they frequently don't make a good marriage match.

They must understand that the perfection they want might not come in the way they anticipate.

They could realize that the love between them is the only true love they could find in this lifetime if they remained together for long enough to realize the advantages of their interaction.