The 4th House in Astrology 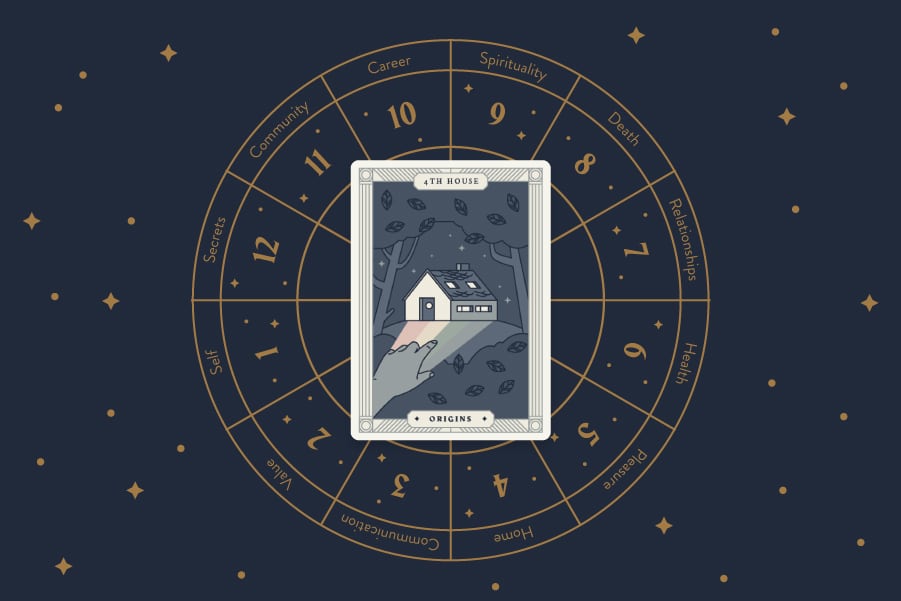 According to astrology, the fourth house in astrology is a precise one, and it governs anything that has anything to do with the individual's past and roots. This encompasses all that has to do with the house, the family, and the ancestors, among other things. Throughout one's life, any concerns that are related to one's location, one's property or land, and one's house are transmitted through this section of the natal chart.

The house of home and family is located in the fourth house. As seen through the family tree and our ancestors with all of their relationship troubles, tensions, anxieties, and hopes, it represents our deepest emotional core, our origins, and our genetic legacy. Our most common spot, our abode of habit and connection to the heart of the Earth, as well as our potential to discover the endless, unconditional love and continual proximity to another human being, is a strange and familiar place.

As the house associated with the sign of Cancer, its Latin motto, genitor, literally translates to "parent," as if it were on a mission to demonstrate the significance of one person who helped us feel at home, whether that person is our biological parent or merely a part of ourselves.

The 4th House In Astrology

The fourth house in astrology is an angular one, and it governs anything that has to do with their or his or her fundamental beliefs. This night-time house rules over the entire household, including the family, the roots, and the ancestors. Whenever a planet is positioned within a house, it is placed at the zenith (also known as the Imum Coeli or I.C.) of the ecliptic, and accordingly, the Sun is to be found there when the person is born at midnight on that particular day. It is via this region of the zodiac that all concerns concerning the native's home, his or her property, and real estate (land, buildings, and even underground locations) are communicated. Cancer is the house's natural ruler sign, and the Moon, of course, is the house's natural ruler sign.

The roots of the native's family and origin may be traced back to this location. His grandparents, as well as the genealogy and customs that have been passed down from them, as well as tangible possessions that have been passed down from prior generations of his family. In contrast to other houses, the grandfather's country house and field are assets that do not belong to other households that have material goods. They enter the native's life from the very beginning, bringing with them everything that the 4th house has to offer. The native is developing inside them, and they serve as his rock of stability. Almost certainly, whatever originates from the 4th house will continue its journey towards the native's successors.

There are a lot of events and facts that the 4th house brings into one's life that occur throughout his early years and are hence permanent in nature. Furthermore, because the house represents the solid foundations of the chart owner, any alteration that occurs as a result of transiting planets can have a long-term impact on the individual's reality because it is affecting the fundamental structure of the individual's reality. Usually, the exterior aspects of his reality that alter are due to the influence of other houses, such as the 1st, which regulate the person's interior difficulties.

When planets like as Uranus or Pluto transit through a house, they may dramatically affect even the location of habitation, and in most cases, they have a long-lasting influence. In the case of malefic planets, a bad aspect indicates a terrible childhood marked by much pain and, in most cases, shattered familial relationships, whereas benefic planets indicate a happy upbringing in which the native is surrounded by beneficial influences. The person's early years are a glistening era in which he feels safe and may begin to blossom as a personality from a young age, reflecting the pleasant vibes that he absorbs as if he were a sponge from the moment he is born.

There are a variety of techniques to determine whose parent the home symbolizes. The astrological community is divided on whether the mother or the father should be perceived via the 4th house, but the answer is likely to have little to do with the gender of the parent in the first place. Given that the 4th house governs the native's early development, the parent who is closest to the child is the one who will be dominated by the house.

In this way, the planets positioned in each house of the chart, as well as the aspects formed by them, may reveal a great deal about the mother and her connection with the chart owner. The 10th house, on the other hand, is controlled by the dominating parent, who is frequently working and away from home.

The closer a planet is placed to the cusp of the 4th house, the more deeply its tale penetrates into the very foundations of an individual's life, according to astrology. In a literal sense, the cusp also governs the graves of the ancestors, and it also gives some information about the karma that has been carried over from the previous incarnation by the chart owner. It is also responsible for the collective karma of the native's lineage as well as the effects that his ancestor's acts have on the entire family, which is represented by the 4th house. There are karmic obligations owed by the family to others that must be paid, as well as the inverse of this situation.

In addition, the fourth house governs magical powers that are passed down from generation to generation as a gift or a curse. In this painting, the abilities shown here include those passed down through families from parents to grandparents, blessings, and curses that follow the native's lineage, and every occult talent that cannot be earned via practice, reading, and deliberate effort. Many generations backward and forwards, might reach extremely deep levels and follow the family for many generations.

Everything regulated by the fourth house is intertwined with our material domestic assets (bricks and land) and helps to define our sense of location. It is the place where we go to sleep, where we nourish ourselves, and where we feel comfortable. It is the shell in which the pearl of our existence is housed, both literally and symbolically speaking. Whatever we call it, we may call it home, even if we don't have a physical house.

Who Rules The 4th House In Astrology?

The traditional ruler of the fourth house is the zodiac sign Cancer, and as a result, the Moon serves as the house's ruling planet. These are the basic foundations of one's family and one's birthplace that is communicated. This comprises one's grandparents, as well as the genealogy and rituals that have been carried down from them, as well as tangible possessions that have been passed down from generation to generation in the family.