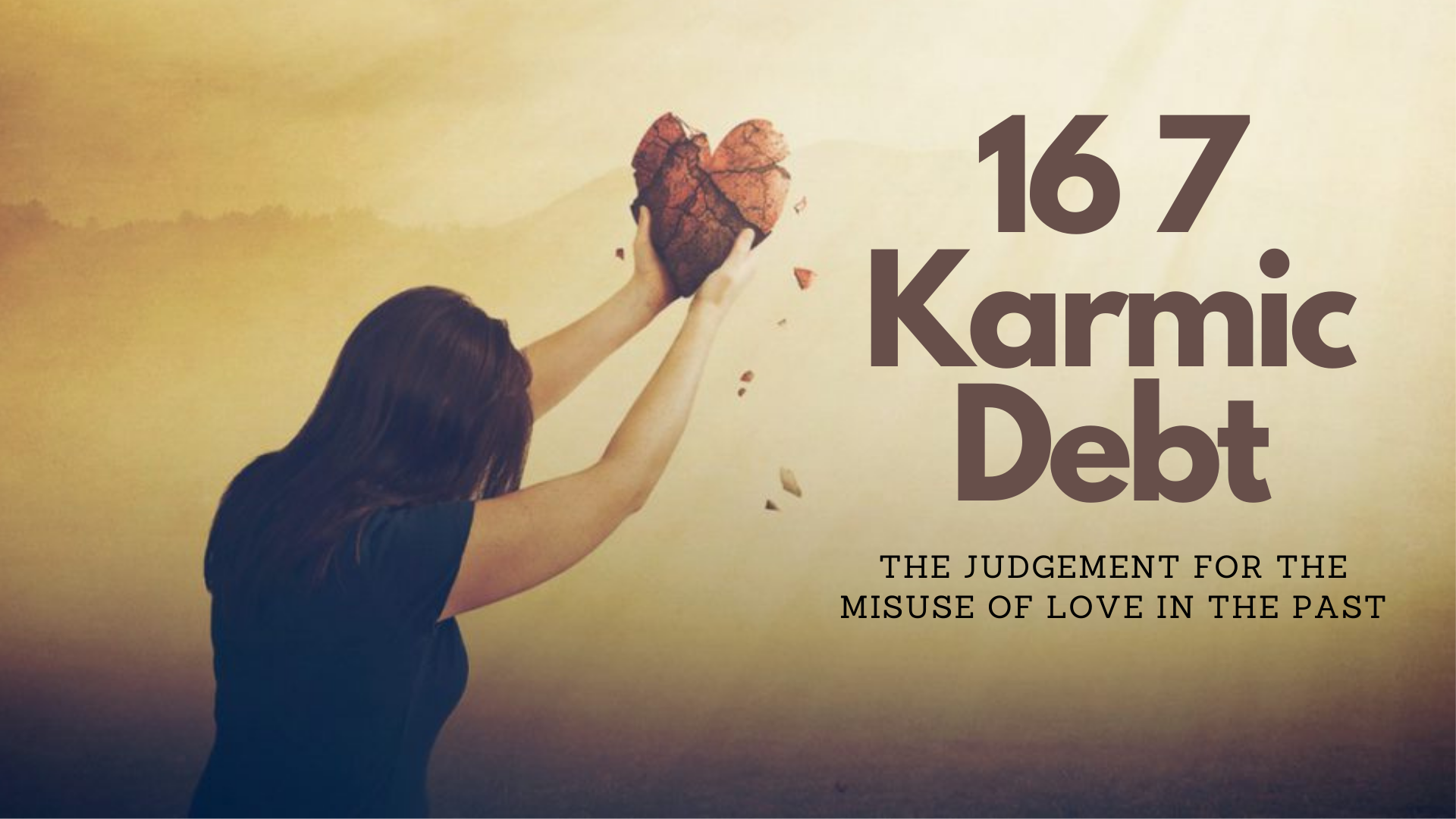 The Karmic Debt number indicates that you have a debt to repay in this lifetime for actions you took in a previous lifetime.

When we speak of 16 7 Karmic Debt, we are referring to the misuse of love in a previous manifestation.

It means you are now making amends for previous abuses in which you were involved in illicit love affairs that caused others to suffer.

Thus, if you think you possess this Karmic debt number, read this article as we will discuss all you need to know about 16 7 Karmic Debt and how you can repay it.

The Meaning Of 16 7 Karmic Debt

According to some Numerologists, this Karmic Number also indicates that you will be challenged in this lifetime to level your ego.

The 16 7 Karmic debt is a spiritual code; you will be presented with experience after experience in which your life crumbles, you embrace humility and your higher purpose, and you experience "destruction and rebirth" from various points throughout your life.

If you have a 16 7 Karmic debt as one of your Core Numbers aside from life path, destiny numbers, and Karmic lessons, understand that love has been abused through acts of self-centeredness, irresponsibility, and distortion of loving feelings.

Understand that the person with the 16 7 Karmic debt will most likely act on more destructive tendencies until the lessons are understood, acknowledged, acted on, and mastered.

A reunion with the great spirit is accomplished through the 16 7 Karmic debt. This can be a painful process because it usually follows a period of significant ego inflation.

This causes a conflict between the ego and the divine will. Life throws obstacles in the way of your grand plans, which can be resented and overcome.

It is a lost battle, and you will most likely feel humbled in the aftermath of the collapse. However, this humility is the key to future success because you will learn to follow the hints of a higher reality.

The destruction of the old results in a spiritual rebirth with an entirely new awareness. This rebirth has an impact on every aspect of your life. It is a much better life for the fall.

If approached correctly, the 16 7 Karmic debt can be a path of progress and great spiritual growth. Placing one's life in the hands of God fosters great faith. Gratitude and peace are firmly established as a result of such faith.

It takes time and dedication to pay off your karmic debt. It necessitates spiritual vulnerability and a commitment to self-improvement.

There are several approaches to working on your karmic debt that is all effective in their own right. However, doing just one thing is insufficient.

While taking steps is a good idea, doing one thing and thinking you're done with healing will get you nowhere.

To achieve the ultimate goal of karmic freedom, you must complete all healing strategies. It doesn't matter what order you do these in.

Follow your instincts and go at your own pace. The speed with which you clear karmic debt is unimportant. It is all about your sincerity and intention.

Here are some tips on how to replay your 16 7 Karmic Debt.

Tip Number 1 - Be Accountable For Your Actions

While it may be difficult, you must recognize that your existence is not limited to this one. You and your previous selves are the same people.

Your bad deeds in the past are the same. To be able to clear your karmic debt, you must first acknowledge that you committed acts that require atonement.

In this lifetime, humble yourself and deflate your ego. This karmic debt is more difficult to overcome than others because you must "prove" yourself worthy in order to end the cycle of birth and rebirth.

Try to be a better listener, consider other people's opinions, and be especially conscious of your actions and appearance. The key is trust.

When it comes to karmic debt, the adage "birds of a feather flock together" is especially true. Negative energy is the driving force behind karmic debt and its ability to transfer across lifetimes.

Negative energy seeks out more negative energy. This implies that toxic people in your life may be preventing you from resolving your karmic debt. They hold you back rather than encourage you to heal and atone for your mistakes.

You don't have to cut them out completely. This will only contribute to your karmic debt. However, politely letting people know that you would prefer they not be in your life is a safe way to ensure that your karmic debt is cleared.

To obtain forgiveness for your karmic debt, you must first send forgiveness out into the universe. What you give to others will come back to you because energy is cyclical.

This act is similar to paying off your karmic debt. Because of the energy you put out to others in the past, you currently have negative energy attached to your incarnation. You're now counteracting negativity with positivity.

One of the most important strategies for clearing your karmic debt is to forgive others as you would like to be forgiven. It is critical that you forgive those who have hurt, betrayed, or neglected you in your life. It is also necessary to forgive yourself.

It was your actions that brought you negative karma in the first place. While it may appear simple, certain habits have been ingrained in us not only in this life but also in previous lives.

You've been doing the same thing over and over for uncountable years, which is why you have karmic debt. To do things differently, you need a lot of willpower and spiritual strength. You can, however, achieve all of this and more if you work hard and dedicate yourself to changing your karma.

Your soul is cleansed of all negative energy the moment you are able to be free of the behaviors that caused you to incur karmic debt in the first place. This will improve your physical, mental, and spiritual well-being.

How Do I Clear My Karmic Debt?

The only way to pay off this debt is to make amends for the mistakes you've made in your life. If you recognize and address your current Karma, you will be less likely to repeat these destructive patterns and will be able to put an end to them before your subsequent lifetimes.

People with the number 16 as their Karmic Debt Number may be able to gain a lot of spiritual wisdom. It represents the annihilation of the old and the birth of the new, much like the process of enlightenment.

What Is Karmic Cleansing?

It is a process of purifying one's conscience by seeking forgiveness from all living beings. Every day, during meditation, this act of asking forgiveness is performed. It functions as an internal mirror. It is known as Pratikraman in Jainism, which means reflection, introspection, and repentance.

To sum it up, 16 7 Karmic Debt is a sign that you abused love in a previous life, causing others to suffer. You were also too stubborn to believe anything other than your own point of view.

16 7 Karmic Debt is one of the most difficult numbers to live with, but if you find the strength to overcome it, you will be rewarded in proportion to what this karmic debt has taken from you.

Clearing your karmic debt isn't just for the sake of reincarnation. It's all about making your life better in general. It has the potential to improve your life.